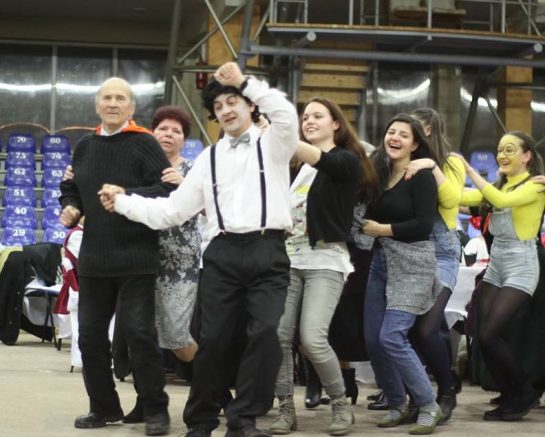 The Caritas’ Family Assistance organized this year the Carnival Fair of the Elderly for the 6th time, which event had as theme the cinema, the movie stars and the cartoon characters. We helped the work of the organizers with 32 eager volunteers, and it was a giant reward to party together with the approx. 400 elderly people.

On Sunday after a difficult awakening we started to arrange the location with the help of a few members of the organizing team, task which was not easy. With a few hours worth of work we managed to transform the place into something very friendly, and so it was ready for receiving the guests.
After the arrangements the team got dressed into costumes, dresses which were curiously watched by everyone during the party. We could meet Marilyn Monroe, Robin Hood and many fairytale animals.
As time passed, the eldery folks began to arrive, who were pleasantly surprised by the nicely arranged hall. In the doorway they were expected by kind, inviting words, delicious pies and drinks. We were surprised by the fact that some of the elderly guests had put on fancy dresses as well. The hall was full of those willing to party and the tables were full of delicious meals.

This year the hosts were the elderly people of Marefalva. The evening was started by the dance of the organizers, and they were rewarded for it with a huge round of applause. Then we could watch funny performances of teams arriving from different locations, for example the dance show of those from Oroszhegy. These funny performances were rewarded during the evening, and we found ourselves at the Oscar Awards.
As time passed the hall got full of elderly and young folks. In the eyes of the old we could see the joy and relaxation.
The 6th Carnival Fair of the elderly will remain an unforgettable experience for the participants and the organizers as well.

You can find pictures here.