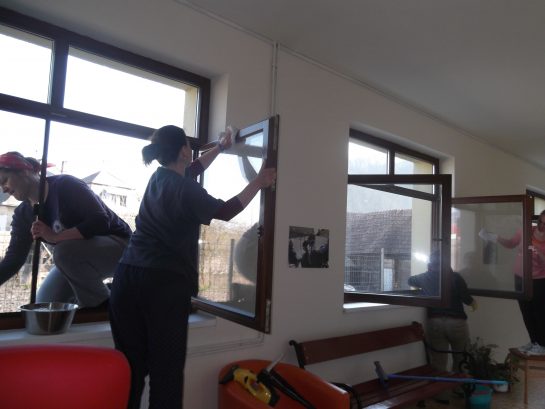 It was a beautiful Saturday morning, fit for beginning the magic. We met the colleague of the nursing home in front of the Deus, who took us to Buzasbesenyo. The place was familiar to us, as we helped in the Christmas cleaning too. The nurses and the whole staff was happy to see us, as well as the maid whose work of two weeks was done in a single morning by our happy little group, without even getting tired.

But the happiest were the elderly. As we met them on the corridors or in the rooms, they couldn’t thank us enough for being there, helping to make the home look better. They could see how much work had to be done by the staff and, as they said, they were too ill to help them out. The old ladies were wondering to see us move around like fairies or angels.

The most touching was that an old man called me by my name and told me he remembered me from Christmas when we had a conversation about his generation, their lives and the world when they were young. I could see how much it meant for him that while we cleaned the window in his room, we talked to him for a while.

I think that the cleaning was the least important job we had done there. We could bring a little joy and light into the elder people’s lives with our smiles, or heart-felt words, and it is always nice to work together. Doing things in a team makes me forget that we are actually working, it seems more like we would get together for a chat or a little laughter. Maybe that’s why in the past people had done the more demanding works in teams.