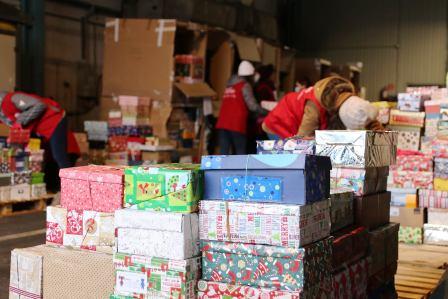 Once upon a gloomy, rainy Friday morning, excited movements could be noticed by the factory workers. Small boxes lined with coloured wrapping paper brought colour to the somewhat gray and cool warehouse.

Diligent hands reached almost all the way to the top of the tall container boxes, eager elves were counting, organizing, and soon the variety of boxes were slowly lined up in arranged piles. Hidden in those packages were toys, sweets, gloves, hats, scarves, coloured pencils, books, colouring books and everything else that children like. As the elves were working, a smile flashed on the faces of some of them. “Why are you smiling?” One asked the other. “Because I see so many beautiful gifts and they put me in a good mood. Anyway, just think about how happy the kids will be.”, the elf in the red replied. “You’re right, they will be wearing a wide smile.”, he agreed and grabbed two more boxes to add to his own set.

Thanks to the elves’ perseverance and hard work, the packages were soon ready to be delivered. All there was left to do was wait for the enthusiastic helpers from Santa’s transportation department to pack their empty sleighs and get the gifts under the trees until Christmas Eve. Soon the vehicles were lined up and the delivery of the packages began. The satisfied elf team cheerfully acknowledged that the children will not be left without gifts this year either. What’s more, they have real surprises waiting for them. The elves then returned home happily, but said that their work is not over, since elves work hard all year, not just before Christmas. So, keep your eyes open and if a little elf winks at you on a warm summer day, don’t be surprised, he’s just doing his job.

This tale is not the product of our imagination, the factory is not Santa’s toy workshop, not even the elves are Santa’s real helpers, but for a few hours, the Caritas volunteers in Târgu Mureş could feel that way in their little red cloaks. If we think about it, we can all be elves at Christmas, as we can help others, too. All we need is a little attention and a pinch of love, in addition to the ingredients for Christmas cookies. And to make us even more aware of this, the end of the story should be one of István Fekete’s thoughts: “Behold, it is good to be good. One gets everything back: both the punch and the caressing.”