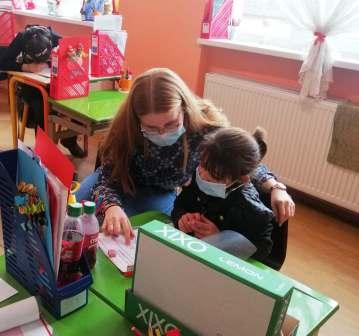 Arianna Kathöfer:
Sarah and me arrived full of anticipation in Romania on the 5th October where we first had 2 weeks together in Târgu Mures in order to get to know our new surrounding, the new people and of course, we started learning the new language, Hungarian. My roommates often accompanied us, showed us their hometown and introduced us to their friends. After those 2 weeks Sarah sadly left to Miercurea-Ciuc and we both started working separately in our Caritas-projects.

I am working with Romakids who are from 6-11 years old living in different villages on the countryside around the city. With some colleagues we go regularly by car from the city into the villages where we meet the kids in our projects in their familiar environment. My job is to create a varied afternoon program for the children including playing, drawing, handcrafting or even dancing together with some other educators. Now where the schools are closed in the whole country because of the pandemic, we also help and motivate them to do their schoolwork.

In the beginning it was still a bit difficult to settle in and feel comfortable in my new home because there was constantly the possibility that the project would have to close due to the pandemic. I always had on my mind that it could be that I have to go back home the next day because of Covid. This made the process of settling in much more difficult than it already was, coming into a new, foreign country without your family, friends and habits. But during time I increasingly felt more comfortable and accepted this as my new home.

Working in a social project, the communication is really important between me, my colleagues and the kids in order to be able to work properly. Unfortunately, this was a harder challenge than I initially thought and even after 3 months it is still hard to express myself in Hungarian. I really enjoy working with the children, especially when I can take responsibility and contribute my own ideas.

Sarah Willems:
Arianna and I arrived at the 5th of October in Cluj-Napoca at the airport. Our local coordinator Csilla and her college picked us up from there. On our way to Targu Mures, where Ari’s new home will be and where I will live for the next two weeks, we got a lot of first impressions from the country. I felt less nervous, because I knew I would not be alone in the beginning of my time in Romania and I would have someone, with who I can settle in. 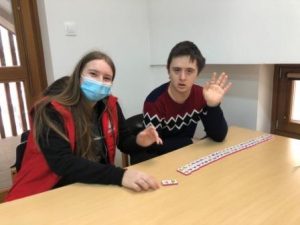 The two roommates of Arianna welcomed us really warmly and I felt comfortable very quick. They showed us around the city, introduced us to their friends and showed us their life here. We had a really great time together and learned some things about the country and of course we tried to learn a few words in the new language, Hungarian. After those two weeks I needed to go to Miercurea Ciuc, where my work in the Caritas project would start. After a two-hours ride with the car I arrived in Miercurea Ciuc and met my four new roommates. I was very happy, that I would not live alone and always have some other volunteers to exchange.

I am working in Szent Agoston, which is for disabled people from 18 years on. The clients come there to socialize with other people and to learn some easy things like cooking and doing the laundry. Sometimes they also learn how to write, read and do maths. We also do a lot of creative things, which we sell on different markets.

In the first two weeks I felt very comfortable, because I was not alone and had always someone I could talk to. When I left Ari and went to Miercurea Ciuc I was sad, because we discovered Targu Mures together and made our first friends there. So for me it was really hard to leave this place and start from the beginning in another city again. I became friends with the other volunteer girls from my flat very quick and also tried to learn more Hungarian words for my work in the centre.