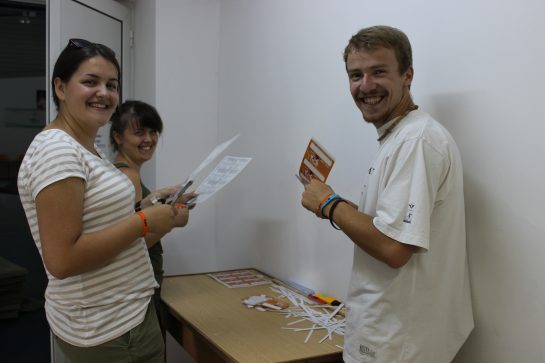 July the 9th, Sunday. A trip full of excitement begins. The destination is Baile Tusnad. The car ran in a quick hour and a half into the parking lot of the local sport stadium. When I looked around a little, I felt like Alice in Wonderland. The whole square was surrounded by giant firs, good scented air, chirping birds and green all around. I calmed down when I saw the organizers from Tg. Mures, Ciuc and Sf. Gheorghe, as well as the organizer volunteers like me. We didn’t wait too much to begin working. We got the accommodation ready quickly, and made a homelike environment for the 96 volunteers who were to arrive the next day. Towards the evening the organizers had gotten on a common ground, waiting for the “big day”. On Monday we made the last bits of arrangements in the camp.

The clock slowly struck 3. Not far from the entrance I was gazing at the many young and elderly volunteers who were full of life, and queuing for registration. Towards the evening everyone found their places. We invited the volunteers to play games to get to know each other. We learned each other’s names fairly quickly. I could already see that this week was going to be about work, adventure, but mainly entertainment.

We began the first workday with a little gymnastics where everyone was present. After the tasteful breakfast everybody was waiting for their duties. We received the gloves, brushes, the paint and we set out to work. It was as if we were made out of a rainbow in the blue, orange, red and other colorful Caritas t-shirts. In the afternoon the volunteers participated in interesting lectures and we could try ourselves in a competition called „Europe quiz”. It was a wonderful day, but the evening’s folk dancing topped it all. The atmosphere was cloudless, the music cheerful, and in the barn the dancing was at hand.

I spent my second and favorite day in the Saint Laszlo children`s home. Our little team was helped by almost 20 eager children. As a work point leader I was wondering, of the strenght and joy of the kids. I could see their happiness, they were relaxed and joyful, because of us helping them, and they could help us as well. We gave woods from hand to hand as 30 midgets in the woods, in the background there sounded music, everyone was chatting, and the job was done swell. 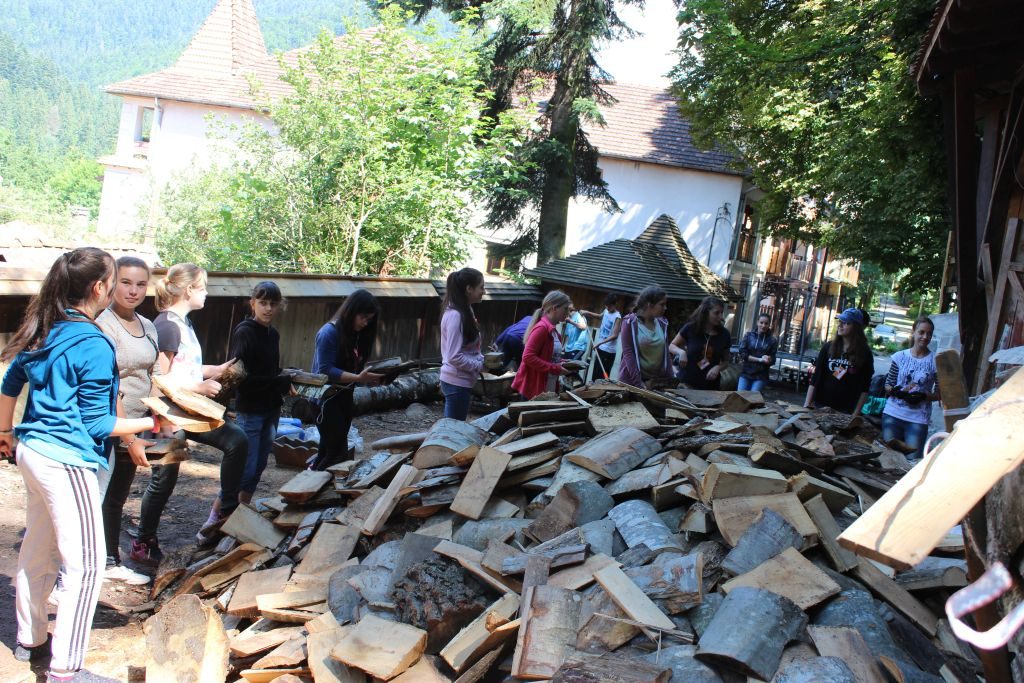 The evening program was movie watching. We watched an exemplary movie that mirrored the goal of being a volunteer and exemplified what love was. Next day the work was done similarly at Tusnad Bai, but he afternoon was different from the ordinary. The gift of the O3Zone Hotel was that we could take a bath three times a day and we could have fun at a local hosting unit. The last night was finished with camp fire. Later we sang at the barn along with guitars, and then the real fun began. Each one of us danced, sang and we partied setting aside every worry and fatigue.

In the morning the fresh air took a dig at us. The final day had arrived. In the morning the last work was done in the town. We said goodbye after lunch. Each of us had tears in our eyes, and we said farewell to the camp promising that we will meet again next year.

This camping was a unique experience for me. There are a lot of fantastic people I can now call my friends, I can recall countless laughing and I learned a lot. It was a wonderful feeling to be good amidst good people.