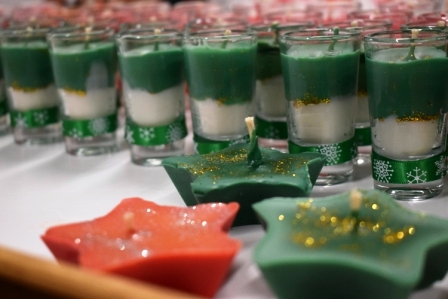 Christmas music playing quietly, the sound of scissors on paper, the scent of glue, a joyful buzzing and the surprised, cheerful and glad sighs of the ones accidentally wandering in.

This was the atmosphere like in one of the rooms at the Caritas Alba Iulia centre in Târgu Mureș, when a few enthusiastic volunteers and their coordinators made coloured and decorated Christmas cards and bookmarks for the elderly at Casa Providenței home for the elderly in Valea Izvoarelor and Maica Tereza day care centre for the elderly in Târgu Mureș. Christmas trees, pine trees, globes and stars, snowflakes, elf boots, holly, angels and wings, snowmen, gloves and candles and many other beautiful things came to life on the gorgeous cards. There was nothing standing in the way of creativity and imagination on that morning, especially because the people making them did not leave out the most important ingredient, that was love. Only their love could make these differently shaped cards, made of different materials, truly complete and colourful. Once they were ready, the cards were decorated with beautiful festive thoughts in order to bring a smile on the face of the elderly receiving them and warmth in their hearts at Christmas.

Jingling glasses, the smell of molten wax, the murmur of girls, festive music and a fireplace with crisp fire in the background – this was the atmosphere that replaced the previous one only an hour later, with another eager team that started working. This time, they had to do something a little unfamiliar to them, but they were hoping for the best, nonetheless. And their hope, hand in hand with the enthusiastic and hard work, brought its results. As a result of the work of diligent hands, a wick stood in every tiny glass, and then the first batch of hot, molten wax arrived. A white layer was placed on the bottom of each candle, then there could come the Christmassy colours – red, green and blue. The smell of crayon mixed with the sweet aroma of the wax, and the clear liquid was already gleaming in eye-catching colours. But to really hide the atmosphere of the holiday in the tiny candles, gold and silver glitter powder were also used, as well as Christmas ribbons and little stars. Once the little candles were ready, everyone got the same idea: How nice it would be to see the children’s faces when they receive their presents! Because just as the work done, the results made them very happy. They really wished that these candles would bring the little ones just as much joy.

Although our faces were covered by masks on both occasions, it could be seen in everyone’s eyes what the holiday and the selfless giving truly means. The groups were not discouraged by the harsh weather outside or the unpleasant circumstances worldwide, because the essence of Christmas isn’t determined by exterior factors, but by what comes from within each of us. This is the way we see it. What about you?

You can view the photos here: