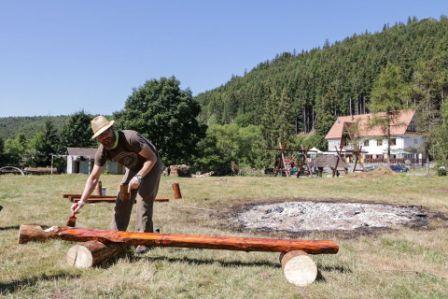 Although the pandemic was able to stop us from organizing our traditionally popular volunteer camp, it could not limit us in doing joyful voluntary work this year. It has become common throughout the past years that smiling people turned up during summertime in a town or village wearing the colours of Caritas in order to make its playgrounds, public buildings and areas look like new, all in the course of one week. Although the regulations introduced in order to prevent the spreading of the virus have made it impossible to organize a camp as big as in previous years, we have begun our work with several smaller groups of our volunteers.

This time, we chose to help on three different locations for the Szent Gellért Foundation. Some of the volunteers polished and painted playground elements, fences and building facades, while others restored old lighting elements. Several others took their share of tree cutting and collecting the mowed hay into a stack. There has also been plenty of work for those who like DIY and manual assembly. In Vlăhița we had a warehouse full of tools and chairs waiting for us to recondition them so that they can be used again. Some lucky ones had the chance to unleash their destructive desires in Odorheiu Secuiesc as there was a barn there that needed to be wrecked.

Our accommodation was also an unusual one, as most of the campers had to sleep in tents at night. It was a strange but at the same time relaxing experience to go to sleep hearing the sound of the mineral water spring on the right and the Vârghiș stream on the left. And in the morning, when we first saw the Selters landscape, we could easily forget about any difficulties that might have arisen.

Resting is always sweet after work and for this we provided our volunteers with an active outdoor form of rest in the afternoons. Spiritual director Balázs Sajgó and psychologist Gábor Borota held a workshop, but we also had quizzes, movie night, campfire and a trip to the Gorge of Vârghiș. However, the program with the biggest success was the one organized by the mountain rescue and spelunker team of Vlăhița, where in addition to sliding down the ropeway they’d prepared, they also provided opportunities for wall and chest climbing.

Although this year’s teamwork was sounder than in previous years, the offerings of our supporters contributed greatly to its success. We gratefully thank the Szent Gellért Foundation, the Vlăhița mountain rescue and spelunker team, Caritas Logistics, Odorest SRL, Prod Spicom Co SRL, Harmopan SA, Tim Ko Brut SRL and the Harghita County Council for their support in the project Új fiatalok bevonása a Caritas önkéntes munkába, a meglévő önkéntesek mozgósítása és motiválása, the aim of which is to integrate teens into the Caritas voluntary work as well as to mobilize and motivate existing volunteers.