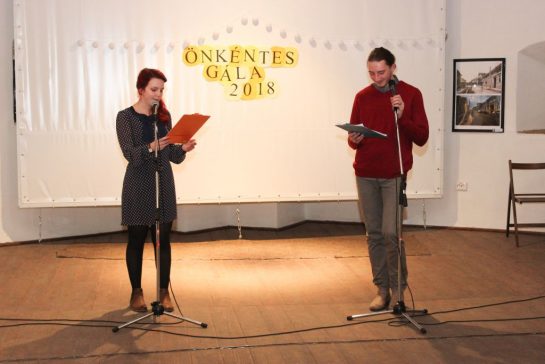 The Caritas Volunteers’ Gala was held for the second time on the 22nd of November 2018, starting at 6 p.m. After long preparations, the organizing team came up with a great program, knowing that those present at the Gala would enjoy every minute of the event.

László Ludescher, director of the Social Assistance Department in Caritas, started the event by thanking the volunteers for their productive work throughout the year.

His speech was followed by the performance of the folk dance group named Csillagfény. They have fascinated us with their graceful movements, taking us into a world full of melody and movement. After the dynamic performance, Kriszta Gólya and Attila Nagy, two of the Caritas volunteers surprised the attendants with a pleasant musical performance. The duet was followed by Tekla Orbán, who we have already known as the voice of Caritas, her reputation being surpassed with her act from the Gala.

After the busy start, the participants could enjoy mouthwatering delicacies at the buffet dinner.

The snack was disrupted by a strange announcement, in which we got informed that there was also a Photo Corner where we could take pictures and print them on a fridge magnet to keep as a reminder of this awesome event.

But the surprises were not over yet, as the volunteer coordinators brought in a cake which the team then ate together.

The evening ended with conversations, people had the opportunity to see their friends and discuss the joyful moments of the past year.

Great thanks to all the people and volunteers who made this wonderful event a reality! We look forward to seeing you next year as well!