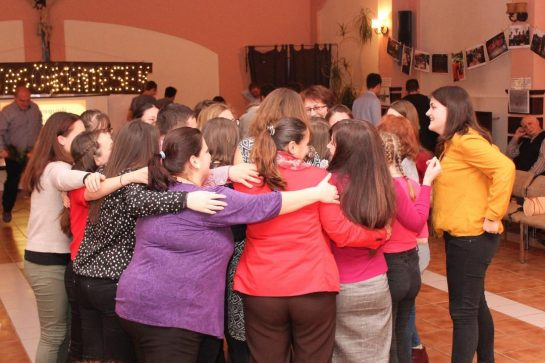 I am a social worker student in Cluj-Napoca at the Babes-Bolyai University. When I was in the 10th grade I had decided that I`d love to work with people. I realized from my volunteering experiences that this was the task for me.

I had also started volunteering in the 10th grade at Caritas, following the advice of a friend. I wanted to make the best use of my free afternoons. The first step was for me to talk to the coordinator of the volunteers, who told me which kinds of tasks would there be, and what whould I be doing.

I was a volunteer for two and a half years, in hospitals with children, until I finally graduated. I visited the hospital with my friend once a week, on Tuesdays. These afternoons had become colored, not only due to the vests with teddy-bears imprinted on them, which we were wearing, and which was loved by both us and the children. They colored our afternoons, as I can testify, that we got much more as volunteers, from those children and people, than we could ever give back. They smiled, laughed, loved, reached out despite the fact that they were ill, and that the conditions were not too bright, and we stayed only a few hours, and we had to find time for many things. We played table games, we colored, watched cartoons, read and talked. The farewell was the hardest, as we had to leave them there, but it was beautiful as well, as they were hoping for us to come and visit them again. We saw thankfulness in the children`s eyes, at the eves of Santa Claus or Children`s Day, when we gave them gifts, sang for them in the hospital, or when we organized a full day`s program in the Bethlehem district.

Volunteering is not only about work. As part of the Caritas team, I made new friends and acquaintances. In Sf. Gheorghe at the weekend retraining, at the Gheorgheni meeting, at the self-knowledge programs, which were organized weekly for a few months, at the Miercurea Ciuc work-camp, where the morning work was done happily, work that was occupation with children, painting fences, washing carpets, whitewashing, or in the afternoons spent with self-development or entertainment. My favorites were the discussions at the end of each month, where there was familial atmosphere, pancakes, playing cards, movies, laughter and small talk.

In my soft more years as a student I was a volunteer in a nursing home. So this time was spent more colored. According to my experiences, I`d like to encourage everyone for volunteering. I`d like to thank for the opportunity given by Caritas from Odorheiu Secuiesc. With love, Zita Molnár. 🙂